Another first Wednesday. Another Perfect Liars Club. And another sold-out crowd, packed to the rafters of DC’s only craft beer bar-cum-performance space-cum-operating hotel -- The Bier Baron Tavern. At first blush, our April 2018 show had all the hallmarks that longtime fans have come to expect. But when host Cara Foran uncovered by a show of hands that the audience was predominantly comprised of first-timers, even the most casual observer knew that we all were in for a peculiar night.

Would this roomful of rookies finally break DC's year-long streak of liar-spotting failure or would they merely add another month of shame to an already abysmal track record? It all depended upon how well they evaluated the allegedly true tales of our storytelling stars:
As moments of the intermission ticked by, the increasingly animated chatter of every teeming table in the tavern was a portent of the boisterous inquiry to come. Did the club's crowd of colts have the night's storytelling snake in its sights? Perhaps.
Questions were asked. So many questions. And still, the unsatisfied audience demanded more details. At the first sign of blood in the proverbial water, the sleuthing sharks began to circle two suspects -- Tija and Joe. It was time to vote!

Hands were raised. Votes were counted. And in one of  the closest races we've seen to date, Joe bested Tija by four votes -- 36 to 32. Cody followed behind with 23. And Jessie was deemed most trustworthy with 18 votes.

The drumroll sounded. Anticipation reached a fever pitch. Had the streak finally been broken? The liar leaped forward to the cacophonous roar of an elated and relieved crowd.

It was Joe! Joe's tale of pop pilfering was more fuzzy than it was fizzy. For the first time in twelve months, it was time for DC to open the real bubbly -- they had finally caught a liar in the act. 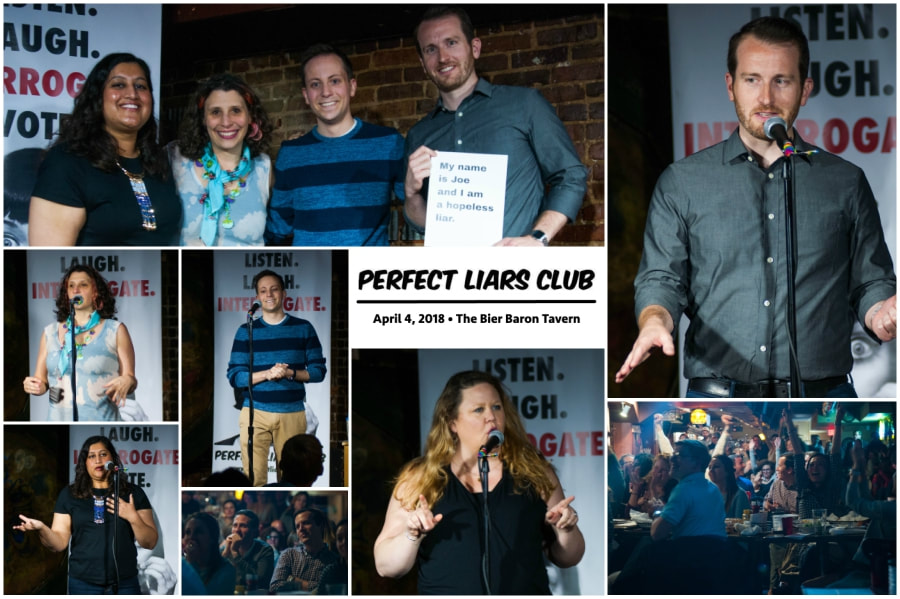