Our first show of 2015 saw our lovely tech queen Roz far away in England, and Layla running around trying to sort out everything at once in a jetlagged frenzy. Luckily there was not too much organize... and soon our suspects were up! Peter Verastegui was first, with his tale of selling his cellphone in a dodgy Bolivian fleamarket. Next, Erika Ettin described the horrible coincidence of saying yes to drugs for the first time, the night before a new job asked for a drug test. Then Ritija Gupta described leveraging her contacts to become the coolest nerd in Chicago. And finally, Michelle Carnes claimed she couldn't resist ordering a challenge-sized burger on her first date with a vegan, and demolishing it in 11 minutes... The audience deliberated. They interrogated. Ritija was made to demonstrate how a velociraptor dances. There were technical questions about Michelle's speed-eating technique. Peter's lack of memory about what concert he sold his phone to attend was suspect. And Erika was mainly mocked for her innocence. When the votes came in, Peter was least suspicious, then Erika, then Michelle, and Ritija was deemed most likely to be the liar... but when the drumroll started, and the liar stepped forward it was... Michelle!


We were visited by Bisnow, and they took photos - here! 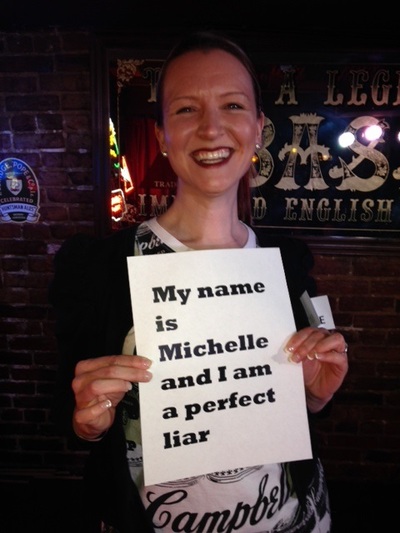 PS We didn't have anyone taking photos at this show - if you have some, send them to perfectliarsclub@gmail.com