Shellshocked, sunburned, and possibly still hungover from Fourth of July celebrations that had occurred 24 hours earlier, some of DC’s biggest Perfect Liars Club fans put their mettle, stamina, and curiosity on display at Dupont Circle’s Bier Baron Tavern for the July 2017 Perfect Liars Club. In exchange, they were entertained by a cast of veteran storytellers who served up four personal accounts so revealing, so raw, and so racy that everyone in attendance couldn't help but be aroused from their collective post-holiday slumber.

In keeping with the patented Perfect Liars Club formula only one of the stories told on this midsummer's evening was a lie:
While our audience may have arrived groggy, any vestiges of fatigue were long gone by intermission, shaken off thanks to the increasingly racy content of our storytellers' tales. And by the time the interrogation began, it was apparent that this crowd was firing on all cylinders. And fire away they did:
When the votes were tallied, it was evident that our audience had found fault with the bawdy tales of Nate and Meredith, who garnered 33 and 26 raised hands, respectively. Cait and Rachel barely registered any skepticism among those in attendance, sharing a combined total of 14. But were they right?

Was Nate's shower accident nothing more than a filthy fraternal fable? The drum roll sounded. Our storytellers suspiciously eyed each other. The assembly's collective anticipation swelled. And as the night's liar stepped forward, a mighty shriek erupted throughout the club. Rachel stood before them a liar unspotted. And much like the church camp pastor in her fabricated tale, she had fooled the audience with the completely made up noises that were coming out of her mouth.
​ 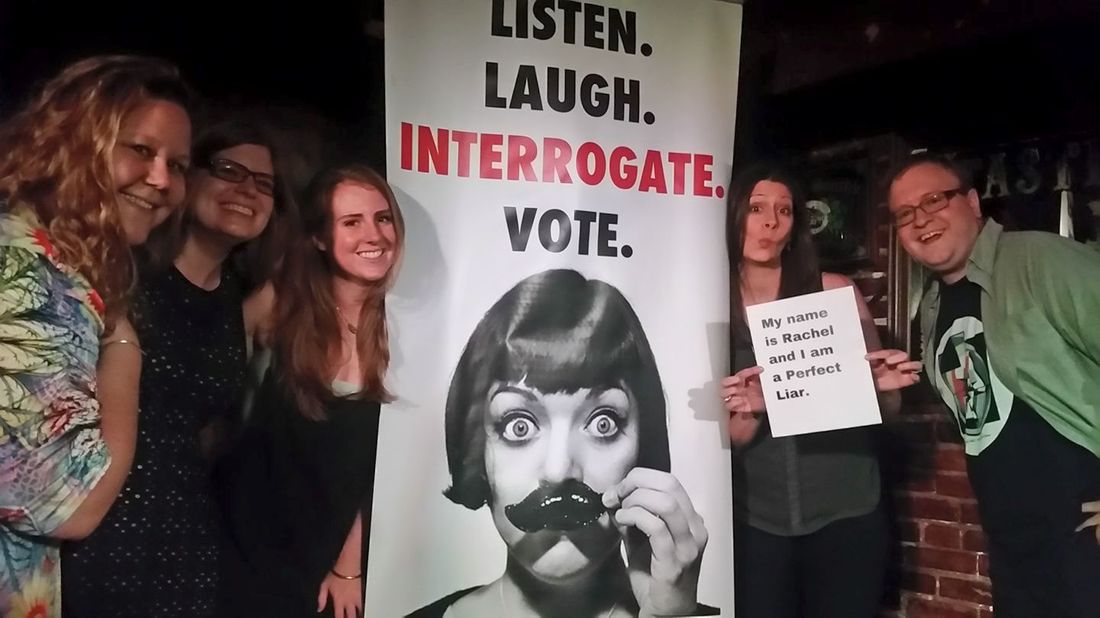