Undeterred by a change in schedule and the ceaseless madness of DC's roller coaster news cycle, the merry masses of Washington descended upon the Bier Baron Tavern and DC Comedy Loft to partake in a rare, mid-month edition of Perfect Liars Club and the final show of the 2017-18 liar-spotting season. Would the city's best and brightest go out on top or would their abysmal trend of failing to finger the fraud among our quartet of tellers continue? Only time would tell their collective fate.

The polished lineup of storytellers, all previous Perfect Liars Club veterans, offered stories as diverse as they were suspicious:

As the story portion of the show came to a close, a growing confidence among the standing room only crowd seemed to indicate that the night's liar was in their sights. A collective certainty that quickly eroded once the interrogation began and the suspect's responses failed to net the 'gotcha moment' that everyone anticipated.

Unable to produce a smoking gun, the sold-out crowd hemmed and hawed and hemmed again as they contemplated which of the four suspects they should vote for. And as each name was called and each had was raised and each vote was counted, a vocal crowd expressed both joy and displeasure with each of their counterparts' decisions.

Ultimately, Louise's tale of international intrigue in a former-Soviet state was deemed most suspicious, garnering 38 votes. Kevin's story of mistaken identity and religious curiosity brought up the rear, netting only 24.

But were they correct? Had the Perfect Liars Club faithful ended the 2017-18 season on a high note and successfully spotted the second hopeless liar in eleven shows? The sounds of a human-generated drumroll filled the space, rattling everything in the Bier Baron Tavern that wasn't nailed down. And as the night's liar stepped forward, a deafening cacophony of sound and shock erupted...

Kevin, the would-be Scientologist, stood before them all, grinning ear-to-ear, another Perfect Liar minted at the hands of a duped DC crowd. And to add insult to observational injury, a joyful Louise disdainfully wagged her finger at the crowd, reminding the 38 attendees who had deemed her the night's prevaricator that they were wrong. All wrong.

See you in September, DC. 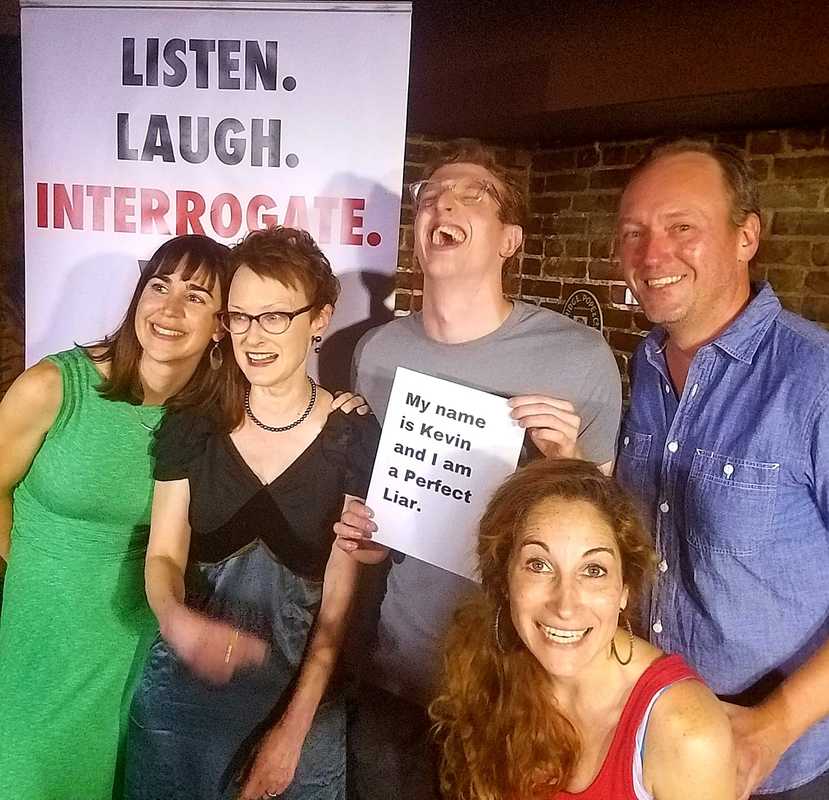