What a joyful show indeed! Four stories of equal suspicion had the audience duped and stumped, but ultimately shamed as the liar stepped forward to claim the crown of Perfect Liar, June 2018.

The stories in question were full of suspicious content right off the bat. We had a touring musician who lost his passport, only for it to conveniently reappear, an evening of hedonistic and bad behavior in an Islamic country without arrest, an old romantic aiding and abetting a kidnapping and the transport of stolen goods across county lines, and the tale of a broken friendship in the bush because of a practical joke going wrong.

What can I say? During some eavesdropping, the Sleuthers were split at the interval between every storyteller except our actual liar. Oh, this would lead to a very interesting interrogation.

Questions were fired with intent, answers were given BUT STILL the audience were mumbling indecision. Alex, if he was your best friend, where exactly was he from in the US? What year was the last AIDS conference? You said several years ago, 2016 is only a couple of years, Hagar. Hey, Jess, what exactly did the police do to you? And, John, what exactly did you say to the German girls that upset them so much?
The frustration of the interrogations got all too much for one Sleuther, as he burst an accusation of being the liar at one Suspect. Dramatic. And rather funny. (He didn’t get it right btw.)

The 2 minutes of conferring was clearly not enough as the Sleuthers had to be coaxed into silence for the voting. Joint third place was Alex and his Austrian passport hunt farce, and John, with his practical joke and broken friendship. In the second spot came Hagar and her eventful arrest-worthy pit-stop in Dubai, and finally, with a massive majority came sweet, naïve, romantic Jess with her burglar and ‘kidnappee’ taxi service.

The tension in the air was like a rubber band at it’s greatest stretch. It was fierce as the drumroll increased anticipation. Then BOOM!!! The room did a simultaneous Mexican wave and erupted with indecipherable noise as John stepped forward and claimed his crown as The Perfect Liar, Joyful June Edition 2018. It was a very Joyful June Edition indeed. Let’s see if the Suspects can outwit the Sleuthers once again at the July Edition. (A special edition, secretly labelled as ‘My Birthday Edition’.)

Tickets are now on sale. 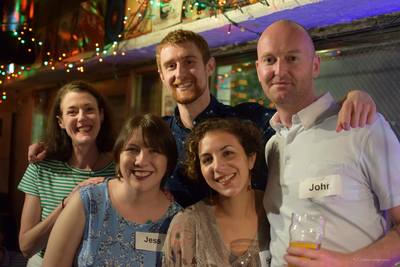 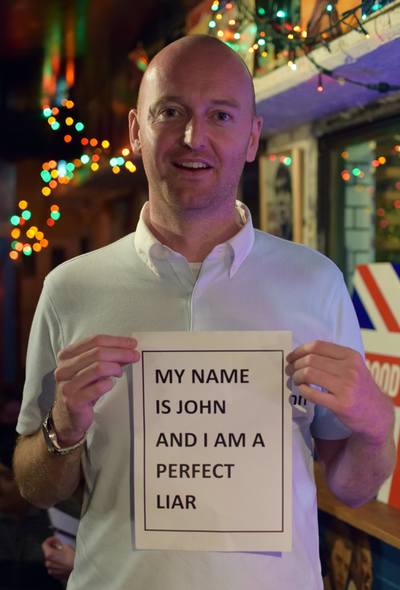