A sold-out crowd of faithful fans and prospective converts made their way to Dupont Circle’s Bier Baron Tavern for the March 2017 installment of the hottest storytelling-interrogation show on the planet, Perfect Liars Club. And even before the show’s recognizable theme played over the PA, before host Cara Foran took the stage, and long before the audience was treated to an amusing set of four suspicious yarns from the night’s storytellers, everyone in attendance was pondering the same question -- was Perfect Liars Club history going to be made that night?

After going a woeful 2 for 18 over the course of 2016, Perfect Liars Club audiences started off the year by going 2 for 2, successfully identifying the liar at the  January and February shows. Were they going to make it three in a row — a feat thought unimaginable not long ago? The only thing standing between the audience and that amazing feat was the storytellers. And, per usual, the storytellers had something to say:
With pride and bragging rights on the line, the March audience yielded an endless supply of thoughtful and penetrating questions, including:
What began as a two-way race between Mike and Colin, the two storytellers deemed least trustworthy by the audience’s reaction, quickly descended into a four-way dead heat, as the crowd’s probing questions continued to chip away at the credibility of all the storytellers on stage. A fact made only more apparent by the evening's’ vote, which saw the highest vote getter best the lowest vote getter by a mere 4 votes.
​
Had the audience achieved Perfect Liars Club greatness? Did it spot the liar for a record third time in a row?

As the tabletop drumroll crescendoed and the audience grew dizzy with anticipation and excitement, a grinning Colin slowly sauntered to the center of the stage to the cacophonous sounds of shrieks and howls. His tale of telescopic mirror marauding was far from fact and his adept answers to audience asks had spared him the shame of being deemed a “Hopeless Liar.”

And the audience? They were a mere three votes away from keeping their perfect 2017 record intact. But it was not to be. So as one streak comes to an end, another streak begins. Or does it? 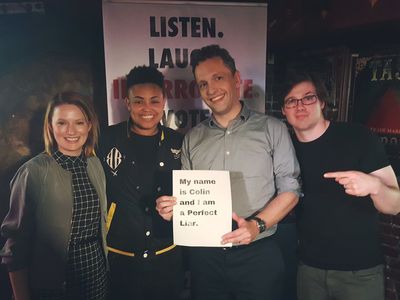 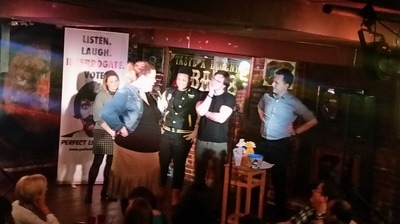 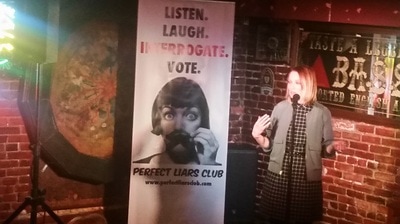 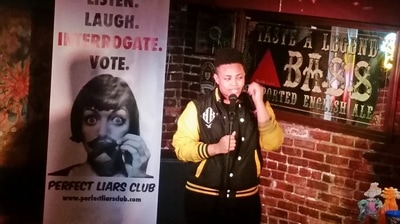 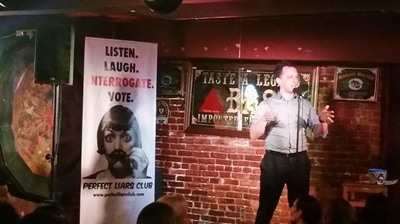 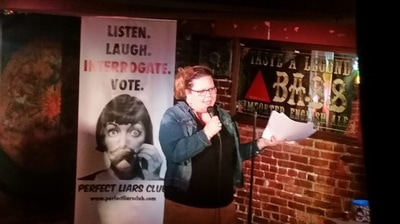