Were they asked, keen observers of the March 2019 Perfect Liars Club would unanimously agree -- this show had everything. A sold out and boisterous crowd. A special mystery guest.  A "Happy Birthday" sing-a-long. A stellar lineup of tellers. And one story so rich, so ribald, so revealing... the performer asked that it not be recorded, confining this bawdy tale within the beer can adorned walls of the Bier Baron Tavern and DC Comedy Loft.

And were that not enough, the honor of DC's best and brightest was also on the line. Our legion of loyal sleuthers had finally spotted a liar at February's show. And as they crammed into every nook and cranny of the popular Dupont Circle watering hole, one couldn't help but be impressed by their unmerited level of confidence. Would the truth prevail? Or, would another liar go unspotted? It was story time.


Were the show to end then and there, everyone would have undoubtedly gone home happy, grinning from ear to ear after hearing those tall tales told terrifically. Little did they know, the stories were mere appetizers to the main course of an interrogation to come.


Question upon humorous question was posed to our four suspicious storytellers. Nonetheless, it quickly grew apparent that no matter the sincerity of one performer's earnest responses, the overwhelming majority was convinced that Graham was lying. A hypothesis that was validated by a vote that had Graham more than doubling the tally of his nearest competitor, Tori, netting a total of 42 raised hands to her 20. Debbie and Davine rounded out the quartet, sharing 12 votes apiece.

Was it that easy? Had the hunches of the bunches prevailed? Was Graham's unrecordable story just too good to be believed? The drum roll sounded. The storytellers jostled for position. Anticipation hit a fever pitch. And then... Davine strutted to center stage, another Perfect Liar overlooked by an overconfident crowd.

Ladies and gentlemen, this truly was a show for the ages. Until the next one. 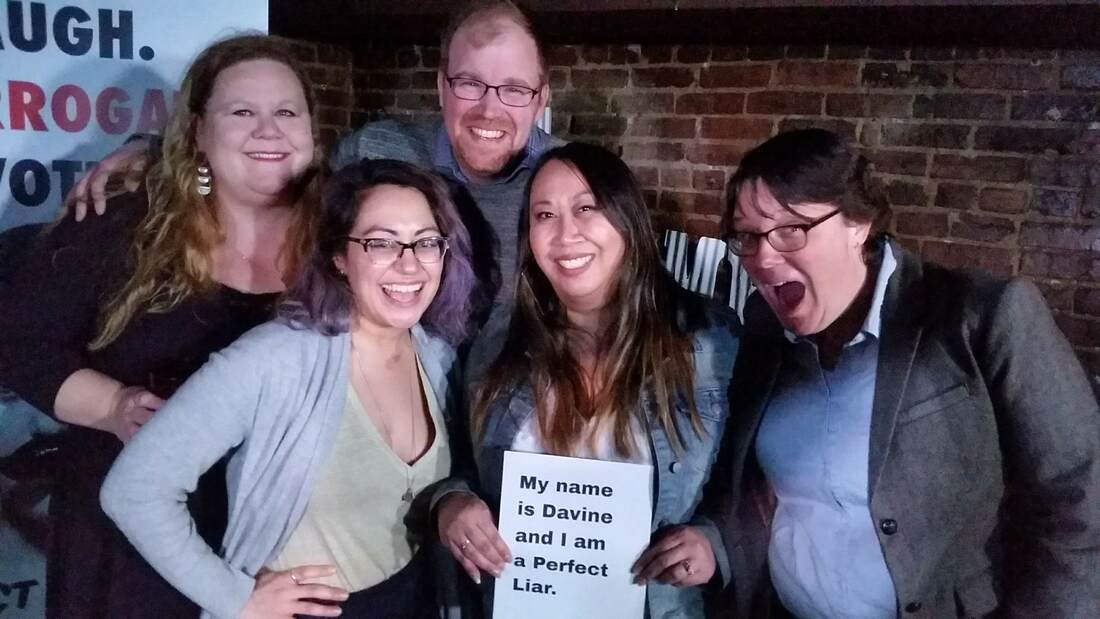