Loopy from the final days of the Presidential election and still reeling from the bacchanalia that was the Halloween holiday, the beautiful and the inquisitive made their way to the Bier Baron Tavern for the November 2016 installment of Perfect Liars Club. There were no tricks, only four delightful treats from two Perfect Liars alumni and two Perfect Liars virgins.


It was clear from the get-go that our shrewd audience had paid close attention to the four extremely detailed tales. One audience member questioned the very veracity of Chancellor’s story, challenging that if he was so drunk, how did he remember any of it? Another armchair lawyer called into question the manner in which Kate acquired a restraining order so quickly at a remote Hawaiian courthouse. Why did Meg ultimately leave her job at Sam Goody, one inquired? And since convincing her childhood tormentor that he could actually fly like “Mary Poppins” by leaping off a roof with nothing but an umbrella, has Stephanie sought counseling? For those of you wondering, the answer is a resolute “No!”

After much debate and the requisite hemming and hawing, the audience had convinced itself that hands down, beyond a shadow of a doubt, Stephanie’s tale of crime and punishment was nothing but pure fiction. But in the end, it was Meg’s arresting tale of a record store drug bust that proved to be the evening’s Perfect Lie. 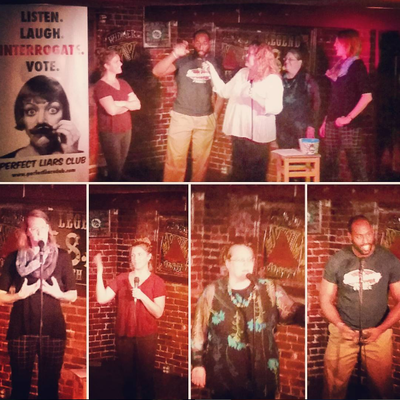 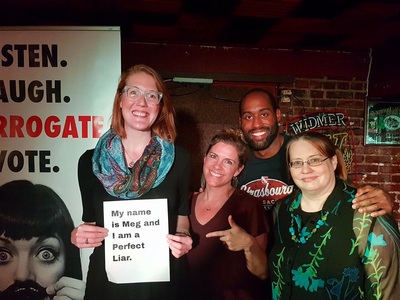