The first ever Perfect Liars Club night was a rollercoaster of laughs, tears, suspense and intrigue. Thanks partly to being specially featured in Scoutmob, Gregslist, Washingtonian, Express, City Paper and the Washington Post Going Out Guide, we were completely sold out - sorry to the people who couldn't squeeze in.

Our suspect quartet were Sarah Gray, Pierce McManus, Pedro Alcocer, and Stephanie Garibaldi. We heard some highly suspicious claims that night - had Sarah really stalked an eye researcher? Did Pierce's girlfriend exist, or not? Did Pedro actually buy a goat as a Passover gift to impress a girl? And did Stephanie genuinely work as a Mayan fertility goddess for six months?

Pedro was named Perfect Liars Club's first official Perfect Liar for pulling the (goat's) wool over our audiences' eyes. They believed in his social gaffe, and he triumphed. Better luck next time, audience! 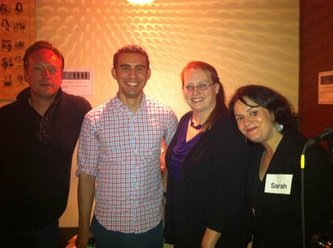 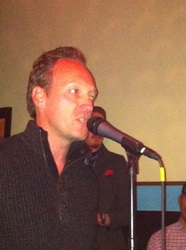 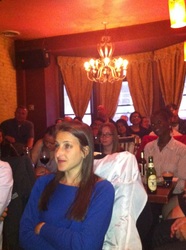 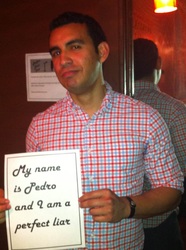