The Bier Baron Tavern and DC Comedy Loft was abuzz with excitement. It was opening night of the 2018-19 "liar spotting season" and the legendary Dupont Circle watering hole was once again packed to the gills for Washington's beloved storytelling show with a twist  -- Perfect Liars Club. Would the capacity crowd shake off last season's woeful 1-10 record and display a sudden knack for lie detection? Only time would tell. But first...

The all-women lineup -- featuring two Perfect Liars Club veterans and two first-timers -- delivered four unique and engaging tales that drew the ample audience in, held them tight, and never let them go:
Before calling for a brief intermission, show hostess Cara prompted the audience. "Do you think you know who the liar is?" she inquired of the crowd. Her query was met with nothing but sighs and moans. The audience was stumped.  A provocative and insightful interrogation was undoubtedly on tap.
As the interrogation wore on, a groundswell of suspicion began to emerge. The audience began to suspect that Meredith's tale of schoolgirl crushes and unhealthy snacks was dubious. A development bore out by an extremely lopsided vote tally. Amassing a whopping 40 votes, Meredith bested her nearest "competitor" Julia by 20. Mireille and Kate brought up the rear with 18 votes apiece.

Was the audience correct? Was the liar Meredith? Had the 2018-19 season begun on a winning note?

Not by a long shot.

Arms raised and grinning ear-to-ear, Perfect Liars Club first-timer Mireille stepped forward to the sounds of thunderous applause and exasperated shrieks of regret. Her story of heartbreak in the desert was nothing more than a great big mirage. 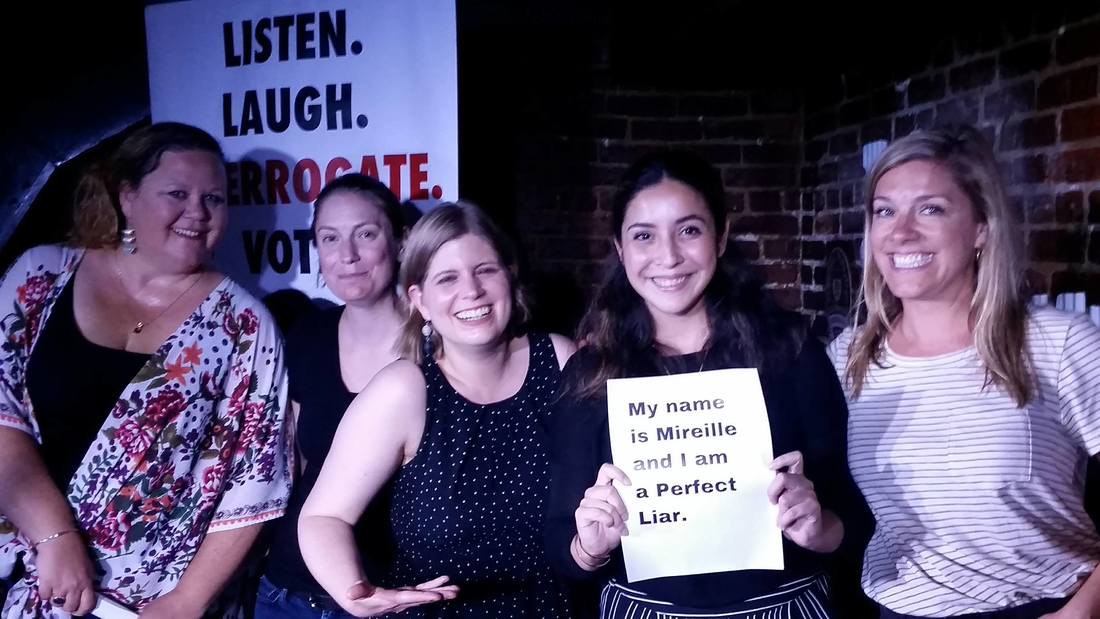