It was the first Wednesday of September, and Dupont Circle's Bier Baron Tavern and DC Comedy Loft set the scene for the opening night of Perfect Liars Club 2019-20 Liar Spotting Season. Packed to the hilt with a sold-out crowd, the legendary watering hole was bustling with the city's alleged "Best & Brightest."

Would the season begin on a winning note for the assembled lot or would they once again be duped by the winsome words of a Perfect Liar? One thing is certain, the crowd's confidence quickly dissipated as soon as the quartet of tantalizing tales commenced:

As the stories came to a close, a seriousness enveloped the room. The audience clearly had their work cut out for them. An insightful interrogation could mean the difference between victory and failure. It did not take long for the questioning crowd to warm up:

Round and round the interrogation went, until some of Justin's ambiguous answers and cloudy recollections appeared to sway a wavering crowd. Besting his nearest competitor, Kate, by 11 votes, one thing was certain -- the audience was convinced that Justin was lying. Justine and Molly brought up the rear, with 27 and 23 votes respectively.

The drum roll sounded. The night's tellers jockeyed for position. The night's liar stepped forward. And the unmistakable cries of a defeated crowd once again filled the hall.

Molly stood before them all, a Perfect Liar unspotted. Her tale of an ill-fated wedding plagued by crickets was nothing but a craftily packaged deception. 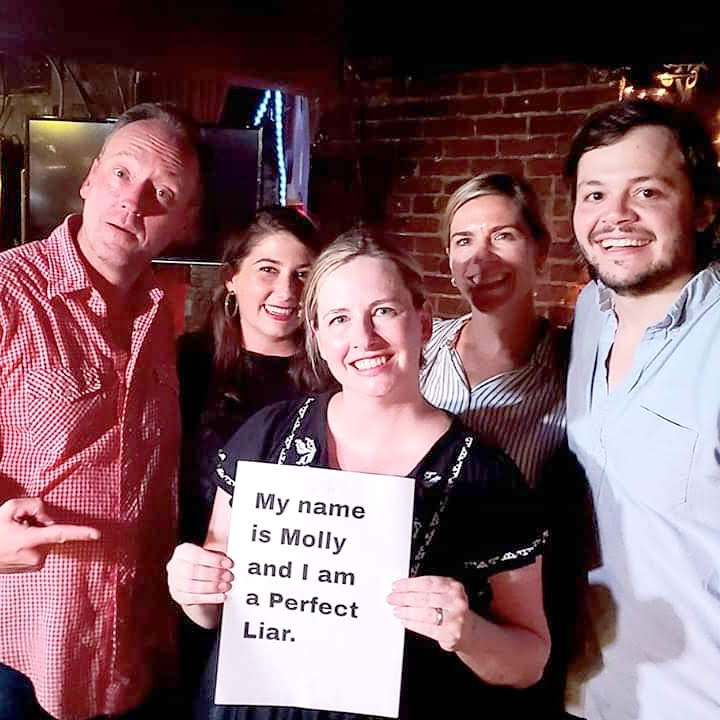