A sudden death vote!!! The first in my history. Which meant the Sleuthers won back their title and we had ourselves a Hopeless Liar. And yes, our poor Hopeless Liar did feel shamed for being caught out.

Our Suspect stories were an interesting mix, all taking place in different cities. We had the tale of the Heroin lipstick being the cause of an Uber stalker, a fainting at the midnight golf course, being freed from the Gobi desert by a Mongolian, and a foolish reliance on a guidebook which ended in electrocution..

The Sleuther confessions in the Sleuth Booth pointed to 2 favourites with a lot of pondering on timeframes and judgements on decisions the Suspects had made in their stories.

Interrogation time proved the shrewdness and listening skills of our Sleuthers. It brought slow and steady questions with some rapid fire follow ups as the Suspect’s answers sparked inquisitive urges in our Sleuther audience.

“Elizabeth, you said you were in a house, but then you said you went to the window of your apartment. Please explain.”
“Daragh, it seems a long time to do nothing, so what exactly were you doing in the time between arriving home and having breakfast with your Dad?”
“Alex, lederhosen. Why?”
“Maiya, why did you go on the dangerous hike if the map wasn’t clear?

The Sleuthers had their 2 minutes of decision making time, votes were made, and then my mind was blown with stage fright! We had a tie. My first ever. Daragh and Maiya were equally suspect. After what seemed like an age, a sudden death solution was shouted out by a regular Sleuther. Phew! And so a sudden death vote was cast. Tense! Boom! With only 3 votes in it, the audience were obviously split. But, the room still exploded when Daragh pounced forward as the liar. It was tough one, but well done to the Perfect Sleuthers!
Can they win again at the Matsuri May Edition next month though?! 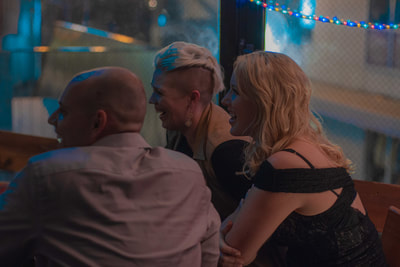 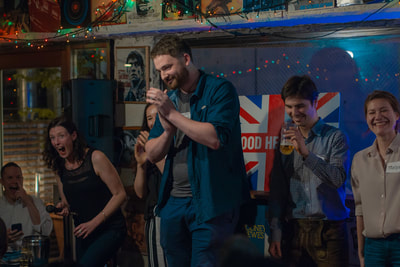 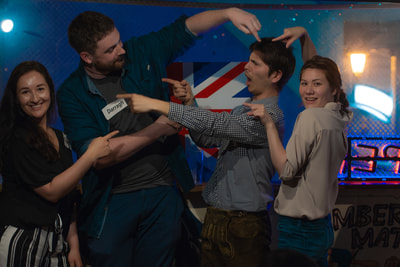 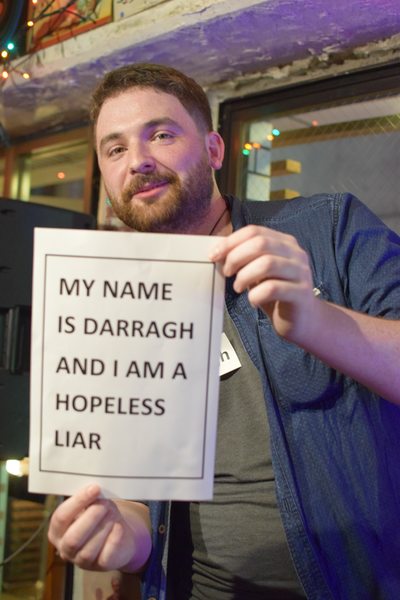