Is it really possible to have 1 host, 4 storytellers and 100 faceless audience members in an exclusive room and still have a brilliant, interactive, entertaining show that transports EVERYONE into a timeless bubble of engaging fun?
Quite simply, yes!

Is it possible that the liar can still get away with duping the online audience with their outright lie and claiming the crown for Tokyo's first ever online Perfect Liars Club Show?
Quite simply, yes!

We made history on Friday 24th April 2020, thank you for being part of it.

The room filled up in spikes of 20 as soon as I hit that broadcast button on the Zoom Webinar. It was also streamed on Facebook live. Soon we had over 120 total audience members, new and old, from UK, India, Germany, France, Israel, Canada, and Japan. All there to watch the first ever online Perfect Liars Club show. It was time to play the theme tune and let the games begin!

The Suspects were brought to the screen one by one and the order was kindly selected by our webinar viewers using the last of my tinned fruit & vegetables from the pantry…..Cranberries, Sweetcorn, Coconut Milk, and Tomatoes. Indirectly, I also learnt the preferences of the viewers, coconut milk being the first picked, which meant Bobby was first up. Then Carol, Ellen, and Luana.

Our Suspects looked comfortable as they regaled the silent viewers with their tall tales. We had a teenage shooting incident with an attempt at home triage, followed by a treacherous journey and a near death experience with the truck that rudely parked itself in the suspects bedroom. The viewers were now deliberating behind the scenes, so to make it more difficult, they had the final two suspects. A tale of the mammoth cowgirl rodeo journey with vintage record players at the side of a highway, bad planning, and the miraculous appearance of 'Catfish', and finally, the revengeful wannabe-lawyer who got fleeced, navigated the Japanese claims court and broke the opposition to get what was rightfully hers.

A quick toilet and beer break was announced and viewers fled to their fridges to get back in time for the interrogation half. The questions kept coming in the live chat, it was hard to keep up, but the Suspects were grilled. Two lucky audience members were caught out as they were unmuted and gave their question live on air.
Long-standing Sleuther and previous Suspect, Bronwyn was unmuted and delivered her poignant question. After the show she exclaimed: "I can't believe I got to ask my question live. I felt privileged!".
No Bronwyn, WE are privileged to have YOU in the audience.

Bobby and Carol bore the brunt at the top of the interrogation.
"Bobby, how did you get to the hospital after you shot Nick?"
"Carol, how far did the truck enter your bedroom?"
"Luana, how on earth can you write 16 pages of complaint in Japanese?"
"Ellen, what is your favourite cowboy song?"  At which point, I insisted that she give us a rendition, just for my sheer enjoyment.

The live voting poll was released and viewers had 120secs to cast their votes. I remember watching as the votes came in, no one else could see them, it felt like I was watching the stock exchange as the percentages for each Suspect went up, then down.  My tummy was all bubbly and my smile was wide.

And so the results were in. Luana was suspected as least likely to be lying with her heroic Lawyer story on 22%, followed by Bobby and his home triage attempt at 24%. Then it was closely followed by Ellen and her cowgirl road side shinanigans on 26%, leaving Carol and her "there's a truck in my bedroom" story as the suspect most likely to be lying.

But who was the liar? My little lonely fingers tapped out a drum roll to accompany the loud anticipatory drum rolls from viewers in their homes.

The drum roll obviously rang out in the homes of the viewers as the screen remained almost silent, with just my little lonely fingers banging away in my lounge. The Suspects toyed with the viewers as their screens flashed on and off and then….. 'TA-DA!' the liar revealed themselves. It was Luana with her sneaky tale of Japanese employment law and the public courts.  The audience reaction couldn't be heard live, but in my heart I knew that apartments across the world were exploding due to the trickery we had bestowed upon them and divorce papers were being drawn up. Perhaps Luana could help with that?

I popped a bottle of Moet live to celebrate a seamless show and the happy times we had all shared. Cast stayed around for a chat to congratulate each other and share more info about those stories which duped the viewers. What an excellent evening!!

Time to do it all again on 23rd May, 8pm. I've got some special storytellers from around the globe lined up for you. Will this make a difference to your sleuthing abilities?

Finally, a Perfect Liars Club show has never been recorded live in its entirety before, in any country, and the recording has hit 1000 views (so far). That's making history my good people, thank you for being part of it. If you want to watch again or challenge your friends, go to the Perfect Liars Club Tokyo Facebook page and you'll find the recording there. It's also available on my YouTube channel, along with all the previous Sleuth Booths and reveals. Go get lost this weekend and enjoy! 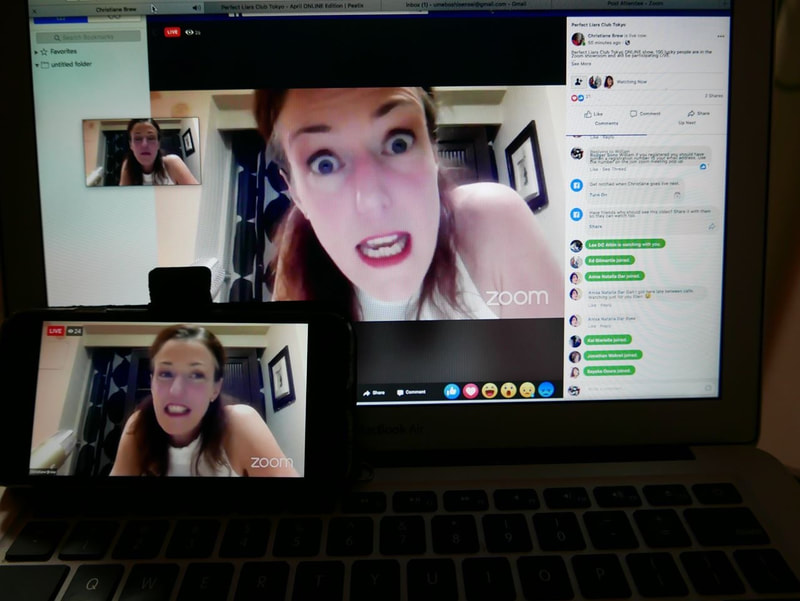 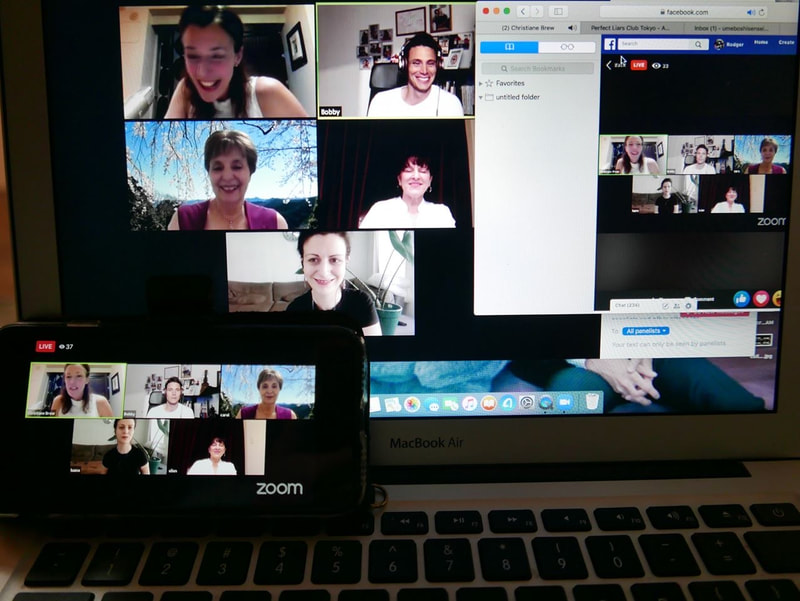 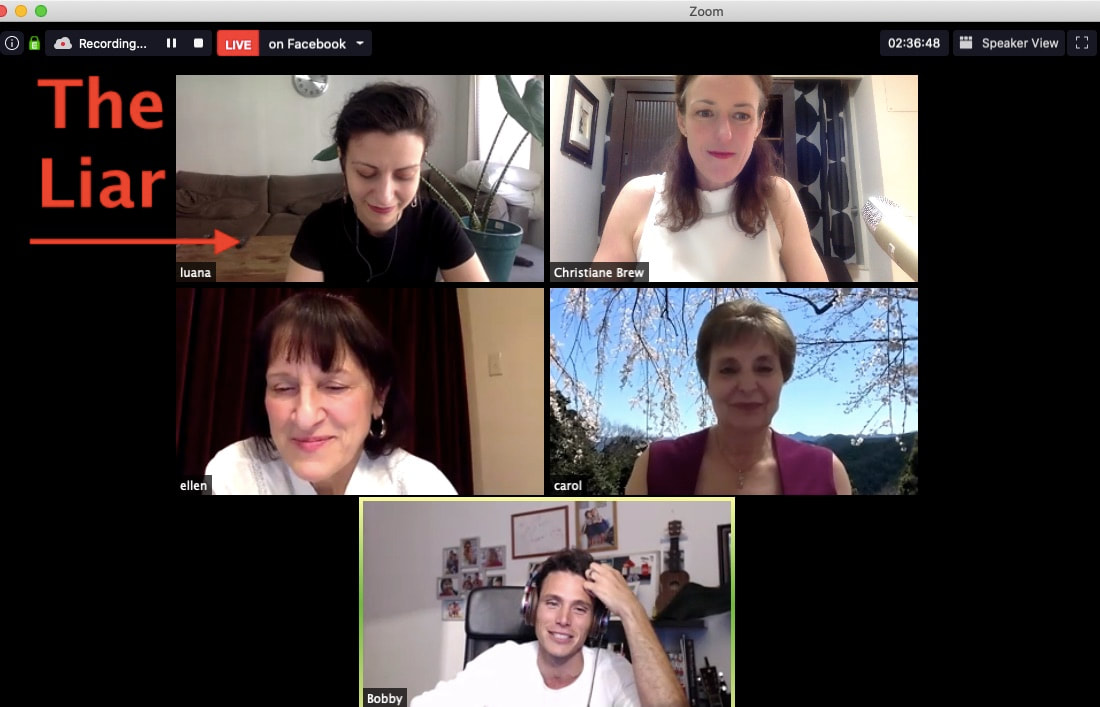